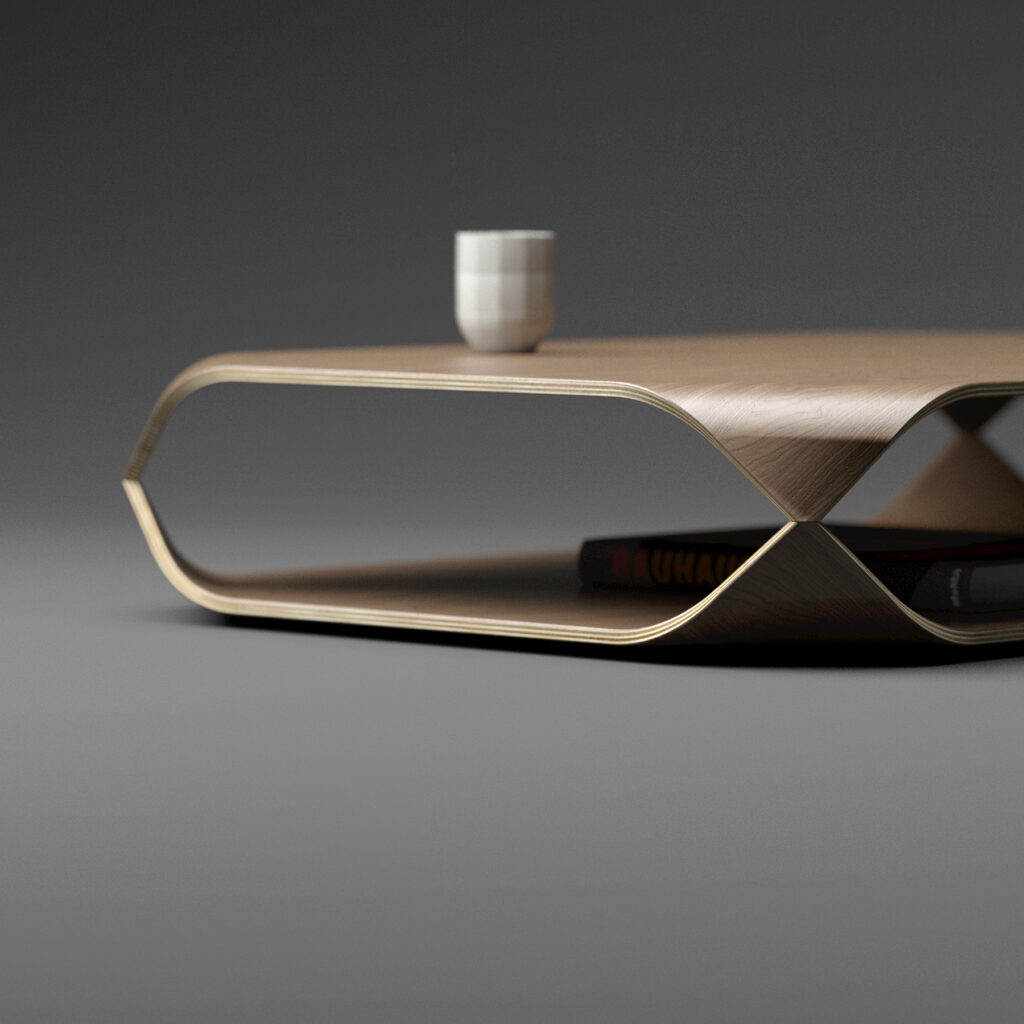 There are few pleasures in life better than relaxing with freshly brewed coffee while getting stuck into a good book. Studio Dezin is taking this experience and distilling it into their latest project – the ‘Attraction Low Coffee Table’. Sheet Good caught up with the studio founder Deniz Aktay to learn more about the table which has been generating a lot of buzz on Instagram due to its minimalist aesthetic and sturdy design.

Studio Dezin was founded in 2020 and is based in Germany. It is led by Deniz Aktay who is a graduate of the University of Stuttgart where he studied architecture and urban planning. After working as an architect, where he cultivated his skills in creating, forming, and designing, Deniz began to follow his passion for making furniture. He took part in furniture-making competitions where he could further hone his design skills, and allow his enthusiasm for furniture to grow.

Through his experiences, Deniz discovered that good design meant finding the right harmony between proportion, material, and functionality. Deniz founded Studio Dezin on these principles – as well as Deniz’s core beliefs in simplicity, originality, proper element joining, and appropriate use of all materials involved.

Studio Dezin’s design ethos is based on using pure lines and a focus on modern minimalism. Wanting to reduce the clutter in people’s homes, their furniture often serves multifunctional purposes.

When looking at the “Attraction” low coffee table, you immediately get a sense of space, as if you’re standing at a lakeside and breathing in the fresh air. Studio Dezin has used steam bending techniques that make the table visually striking, turning the corners up and sealing them to each other. This gives the impression of a reflection on the water. Deniz says that to him the two sheets feel as if they have been pushed apart by “an invisible energy”. The sheets can only touch on the corners as if they are attracted to each other. Therefore, the table was dubbed “Attraction”.

Inspiration tends to strike Deniz while he is scrolling through social media, particularly Instagram and Pinterest. Something will catch his eye and he will get the craving to put his ideas down on paper. His initial sketches are done quickly and don’t include any limitations on geometrical and perspective correctness. Deniz believes that the initial sketch “doesn’t demand perfection but helps you in finding ideas”. From here he will turn his idea into either a virtual or a physical 3D model in order to check its viability. If everything works, he can start the build process.

Deniz says that they use steam bending techniques due to it offering “maximum design flexibility”. It is also much more environmentally friendly, as it reduces the number of materials used, and the bent corners create a much more durable and long-lasting product that can be used for years. In Deniz’s words “Steam-bent wood incorporates classic woodworking techniques with futuristic shapes and curves.”

The two plywood sheets have been placed together to create a double-sided table which also serves as a bookshelf. This allows the owner to create a dedicated space in the center of their living room for reading and relaxation. A chestnut-colored coating is used that is reminiscent of dark roasted coffee. The “Attraction” table is designed to make it as easy as possible to let go of your daily worries and sit down with a fresh cup of coffee and a good book.

The table has been generating a lot of buzz on social media, currently sitting at over 14,000 likes on Instagram. People are attracted to the minimalist aesthetic and strong build quality. As more people are starting to lose their desire for rampant consumerism and return to a “less is more” lifestyle, the “Attraction” table fills that desire for a piece of furniture that is built to stand the test of time, but won’t take up too much space or make the room it’s in look crowded.

While the table is still in its prototype stage, we at Sheet Good are excited to see a full release in the future and are keeping a close watch on Deniz and Dezin Studio to see what exciting designs they come out with next.