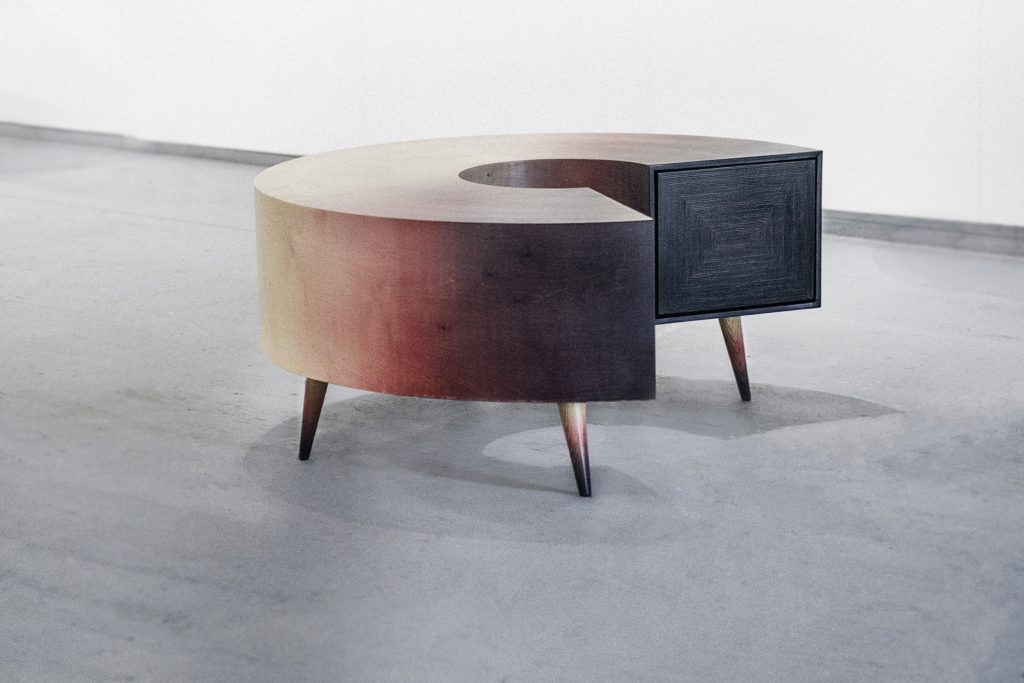 If your brain isn’t already broken by circular drawers, how about staining plywood with wine?

Coco Drinks Wine is the culmination of past form studies, the loss of a man’s best friend, having crates of wine on hand, and an invitation to make something humorous and absurd in these chronically pandemic depressed times.

LOUIS LIM IS A FURNITURE DESIGNER AND SCULPTOR BASED IN NEW YORK CITY, WHOSE WORK EXPLORES IDEAS OF PLAY, ABSURDITY AND FUNCTION.

I talked to Louis about his process and the story behind Coco Drinks Wine.

Oftentimes a great idea comes from a mix of past experience, current circumstances and a catalyst. In this case it’s a mouth-watering piece of plywood furniture which breaks my caveman brain’s understanding of what’s possible with plywood. Louis originally came up with an idea for a circular drawer with his piece Round & Round.

“IT WAS A GREAT EXPLORATION IN GEOMETRY, BUT THE SCALE OF IT WAS NOT VERY ACCESSIBLE TO THE GENERAL PUBLIC. SO I STARTED TO THINK ABOUT A SMALLER APPLICATION OF THIS IDEA.”

While trying to rethink Round & Round, Louis landed on using birch plywood as the material of choice for Coco Drinks Wine. He found multi-ply birch’s thick face veneers enabled him to sand the piece smooth after forming, without sanding through the veneer.

Where did the Idea for Coco Drinks Wine come from?

”At the end of last year, I was invited to show at Scope Miami during Art Basel, and I took that opportunity to refine this coffee table. With the pandemic and depressing world events, I felt that the piece should be humorous and slightly absurd. Additionally, my dear pet dog, Coco, had just passed, and I had just started (and am currently wrapping up) a commercial wine store job. So everything kind of aligned with Coco Drinks Wine.”

Louis used a combination of digital fabrication and traditional methods to conceptualize and realize this intricate piece. His process started by using 3D modeling software to design, plan, test and tweak his ideas to work out difficult details before physical prototyping.

Software: “I use rhino7 for all my design process, sketching, detailing and unrolling parts for dwg cut files. I’ve used others but rhino is my favorite UI and nurbs surfaces make more sense to me.”

With Louis’ design of Coco Drinks Wine, he shows us his ability to flirt with the limits of what is possible with sheet goods. After completing the design in 3D, all the pieces were digitally “unrolled” or flattened so they could be cut from sheets of birch plywood. Louis used a production CNC router to cut the parts and machine the joinery including some of the mitered edges. Just to be clear, he mitered the edges of a circular box. My brain can not compute the difficulty.

CNC: “I outsourced the CNC to our neighbor Southside Design @southside.db They have a TechnoCNC HDS.”

Then the real work started. All of his flattened, cut pieces now needed to be “un-flattened”, using a technique called kerf bending. Louis used a table saw with a cross-cutting sled to cut a series of grooves into one side of a plywood sheet, allowing the sheet to be bent into shape.

Louis assembled the circular drawer using the base piece as the jig to form the kerf-bent sides. After forming the circular shape, he glued solid wood strips into each kerf or groove and left them to cure. Once these dried the shape of the drawer was fixed.

Louis then bent-laminated small solid wood strips to go around the base and sides of the drawer. These wood strips would act as guides for the circular drawer inside of its circular shell. Using a strip of hardwood meant he could fine-tune the size of the glides by sanding.

Louis grooved a ¼” (~6mm) slot into the drawer sides, creating a larger glue surface to align the bent-laminated glides. He then glued  ⅛” (~3mm) dowels approximately every 10” (~250mm) to pin the glide in place.  A particular challenge for Louis was exploring and refining the best geometry and size or surface area of the glides. “Although it seems intuitive that glides reduce friction,” Louis said, “actually having a larger surface-area contact makes the drawer glide really well … It’s all about the geometry. If the surfaces are smooth and concentric, it’ll glide regardless of having a glide or just wall-on-wall. The difference is that without a glide, there’s a larger surface area to shape and sand.”

Next Louis assembled the outer shell by forming and gluing the top and sides in a similar process to the drawer. He prepped the base by gluing the machined solid wood feet in place using through-tenons. And finally, Louis laminated several strips of birch plywood together to create a face grain pattern. To emphasize the miter cuts of the carcass, he cut the face grain panels into triangles. He then glued these together and attached them to the two fronts of the drawer.

There’s a lot to love about this piece, but the finishing is my favorite feature by far, and the one I was most curious to learn about. When I asked about this idea, Louis explained, “The gradient stain was an accidental discovery from drinking wine in the shop while building wine display units and leaving stir sticks in half empty glasses.”

“THE NATURAL CAPILLARY ACTION IN THESE WOOD STICKS CREATED A BEAUTIFUL GRADIENT, AND I IMAGINED THE TABLE LIKE AN ANIMAL DRINKING WINE.”

The gradient coloring was a continuous process that took nearly two days. Louis first sprayed the wine using his Fuji Q5 spray setup. He then sprayed the surface with water to increase the capillary action of the plywood, but as one might guess water and wood aren’t exactly friends. Louis had to very carefully wet and heat dry the plywood to achieve the optimal effect.  He described this process as “tricky cause the wood can over swell and delaminate the plywood so it’s a long process of drying vs wetting and waiting for equilibrium.”

“It’s an exhaustive process and balance between drying the wood and keeping it wet for a natural gradient bleed.”

Once the gradient had dried on the drawer and the inside of the carcass, Louis applied a clear coat to seal the effect. Finally, with all the internal finishing complete, the last assembly step was to glue the base on, trapping the drawer inside. Louis then repeated the finishing process on the exterior: sanding, masking, staining/capillary magic, and clear coating.

The final result is something bewildering and exciting to see. Coco Drinks Wine is successfully absurd and invites play, but is also refined and elegant. To me the idea of a circular plywood drawer is about as wild a thing as I can imagine. I’m stoked Louis has been designing, building and iterating on this idea. When I spoke to Louis he said, “I’m refining and trialing this still, so I’m hoping for as many orders as possible so I can keep refining the build”. So, if a dozen of you reading this could put in an order with Louis that would be great! I’d like to see more of these in existence. Louis can be reached at makingworks.com/contact