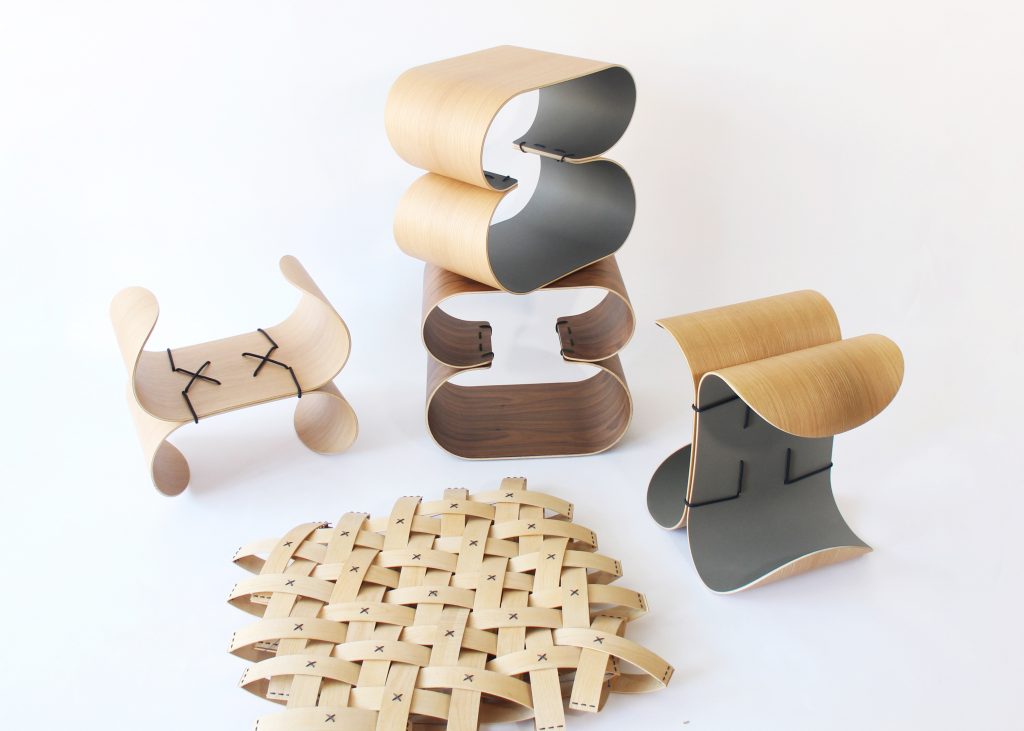 Crowdfunding platforms have become a very popular tool to kickstart a business or collect orders for larger batch production. Although it’s well known that Kickstarter success rates are low, the hope for a breakthrough mostly overpowers the fear of failing. Having completed the MOWO furniture Kickstarter campaign last year, I want to share some insights with you about our journey,  the highs & lows, the dos and don’ts, and hope that some of you might take away something useful :).

During my Masters at University of the Arts London, Central Saint Martins, I designed a collection of fun, elastic seats made of molded plywood. The collection gained a lot of  positive feedback and opened doors to exhibitions, press, collaborations and incubator programs after launching at my final degree show in 2018.

After graduating from Central St Martins, I knew I wanted to pursue the idea of establishing my own furniture brand. I received great feedback and I wanted to launch the collection on the market. The first thing to do was to find a manufacturer, who could mass-produce the molded plywood pieces. We found an experienced manufacturer about one year after graduation who was able to produce the challengingly thin shapes. The production was only cost-efficient with order quantities over 50 pieces. The easiest way to reach that sum without having to worry about storage logistics was to launch a  pre-sale campaign. We found that Kickstarter was the best fit and started the preparation.

It was very important to us to finish the product development before the start of the campaign. Having gone through an unsuccessful prototyping stage with a different  manufacturer the year before, we needed to make sure we could guarantee the desired quality before collecting orders.

In June 2021, in the middle of the pandemic, we received the final set of prototypes and we were ready to sell! Preparations for the campaign started immediately and we launched three months later in September.

Preparing for a furniture Kickstarter

I decided to produce the video and build the campaign myself. I was full-time at work, and my amazing friends helped with storyboarding, photography, modeling and proofreading all texts. The directors at the company where I worked offered their studio for the film and photo shoot. Also, I had some clips I produced at university which helped lower the workload. I did the photo editing and video cutting during a week off work, replacing my summer holiday. It took a village to make the campaign video, and although it is not as sleek as other professionally made clips you see on Kickstarter, it conveyed the message very well.

While juggling my day job, campaign preparations, and my private life, I was also going through a break-up. I was struggling to keep my concentration and energy up. As a consequence I made multiple errors in my job, which caused some friction. I now know that a few more weeks of holiday would have made for a smoother journey, in preparing for the campaign launch.

Pre-campaigning started about two months before the launch date with an Instagram / Facebook campaign and newsletters. After gathering a little audience from previous exhibitions and press coverage, I prepared the content. It was a mix of images, small video clips and text and scheduled a sequence of 3 posts per week. I tried Tiktok, but didn’t figure out a successful recipe as I only gained a handful of followers.

I felt pretty confident when we launched the campaign and we soon saw see the first orders flying in. It was a very exciting first three days in which the campaign reached more than 30% of the total goal, and after 10 days we reached the 50% mark. But we then entered the dreaded dead zone, a phenomenon I’d read about in others’ progress reports.

Despite watching YouTube tutorials and reading online guides about how to lead a successful campaign, none of them covered marketing strategies and budgeting. I realised this was a super important link to a successful campaign completion! Some of you might shake your head because you’d have known better,  but for me, this was completely new territory and I relied on the knowledge of online sources.

Fear of not reaching the kickstarter goal

Of course, I panicked when I realised that the campaign was stuck. I started to reply to some of the thousands of emails I had received from companies promoting marketing services to Kickstarter campaign leaders. It became apparent that a professional and efficient marketing campaign would not be affordable with the current funding goal. A London based company quoted £120-£220 per week and recommended having 20% of the total goal allocated to advertising. They said ideally they would start working with clients 6-8 weeks before the Kickstarter launch, and then for 6 weeks when the campaign was live.

My experience with Kickstarter promoters

We had obviously missed this train, so I decided to get help from a few online providers that offered press coverage and direct reward sales for Kickstarter campaigns. It was a pretty bad experience as only one-third of the companies delivered.  One was a complete scam but luckily I got a refund from my credit card company – stay away from ‘Sponsoredboost’!

Another company ‘Promotehour’ offered a guarantee of three media placements through PR packages lasting the duration of the campaign. I was very positive in the beginning, as they quickly delivered press texts and contact lists. After a week they had received interest from two magazines, ‘GQ’ and ‘Furniture Today’, for future coverage, but no one was interested in featuring a furniture Kickstarter until it was past the funding stage. Promotehour did secure us a feature in ‘Deadline News’, a Scottish news agency, but unfortunately this didn’t have any impact on the campaign. In the end, we agreed to postpone the service for after the campaign when we had established connections with retail and online shops.

Through the freelance service marketplace ‘fiverr’ I found a contact who offered direct sales by sharing the campaign with his contact list. He delivered the two promised sales within three days, which, for a change, was a nice surprise but at the same time it was a drop on a hot stone. The obligatory Instagram/Facebook ads did bring a few backers on board, but not more than 6% of the total  pledges.

When I realized we wouldn’t reach the funding goal

Even after exhausting all marketing channels I could find, I realised I wasn’t going to be able to pull the campaign over the finish line and at some point, I was even close to giving up. However, although our campaign target proved to be out of reach, we had a great community of backers generating a large enough order quantity. I did the only possible thing left to do and personally paid in the missing amount just before the last day to fully fund the campaign.

At the time it was a bittersweet end, but a few weeks later all I felt was the sweetness.  Production started without any complications and I fulfilled all orders in time. I was so happy when people started sending pictures and positive feedback. It was the moment I had worked towards for the last three years. It gave me the motivation that I needed to devote myself to the creation of a new furniture brand.

The money raised in the campaign just about covered the costs I spent on campaign preparations, manufacturing, shipping & marketing. It surely didn’t cover my time but I was happy to break even. Another positive effect was that the wave of interest continued after the campaign and I made a couple of sales at higher prices.

After my furniture Kickstarter was funded:

Now, three months after shipping all rewards, I’m working on creating a network of retail partners and sales agents. A new collection is in the making and a website and marketing plan are in  development. It’s a super exciting time and I’m so grateful for what I learned from the  campaign. This experience prepared me for the real world, which is a whole other level!

Check out the blog to read other great plywood furniture stories, and if you’re looking to launch your own furniture Kickstarter let us know.